Dawn Sweet was Grandview Medical Center’s nominee for the Ohio Hospital Association’s 2017 Albert E. Dyckes Health Care Worker of the Year Award. One employee from each campus is nominated for this award, which is presented annually to one Ohio hospital caregiver who personifies a leader, gives back to the community, reflects the mission and values of his or her organization, and routinely goes beyond the call of duty. You can read Dawn’s nomination below: 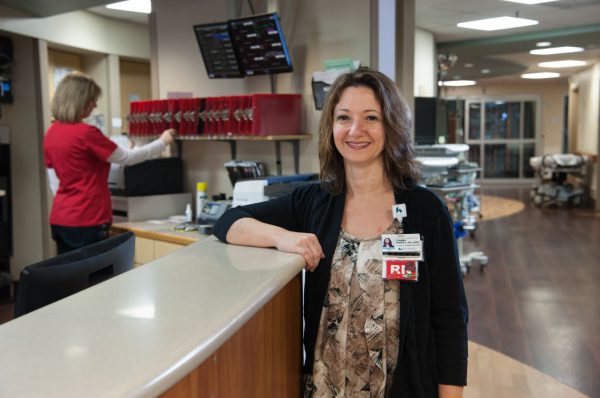 Dawn Sweet, the emergency department manager at both Grandview Medical Center and Preble County Medical Center, is a humanitarian whose compassion and self-sacrifice allow her to serve not only the physical needs of people, but also the holisitic needs of the community. An instrumental leader in the construction of the Preble County Emergency Department, Dawn is now involved in establishing a permanent base for a medical helicopter there as well. Outside of her job, she organizes many events and fundraiser that benefit children and the underserved. Dawn’s leadership style garners loyalty and is characterized by her ability o understand individuals’ passions and empower them to make a difference.

Dawn has exuded leadership since the day she was hired. Her ambition, relatability, and easy-going persona are what impress superiors and staff alike. Since beginning her role, she has been highly involved with the staff and the people of the community. In addition to helping see PReble County’s Emergency Department built, she assembled the staff and hit all of the targeted metrics. By identifying the passion of each staff member, she was able to create a positive culture that fosters growth for all members of the team. Referring to staff as her “frontline,” she says her role is not a position of power, but one of support. Dawn has the full buy-in of her team because of her honesty and emphasis on helping staff think and mature on their own. Because of her leadership style, the Preble County team experiences little to no turnover and is extremely self-sustaining. Dawn is continuing this engaging leadership style in her new role as manager of the second largest Emergency Department in Kettering Health Network. While embarking on this new journey, she plans to root herself in the community of Dayton and further her growth and knowledge as a leader at Grandview Medical Center.

Goes Beyond the Call of Duty

Dawn strives for herself and her team to give more. When she first arrived at the Preble County Emergency Department, she challenged staff to go beyond the Emergency Department’s walls and reach out into the community and give back. Serving as a member of Eaton’s Rotary Club, she keeps county members updated with the happenings of the Emergency Department. By doing so, Dawn encourages participation at events that she helps coordinate for others in the community to enjoy. there is one instance in particular that shows Dawn’s heart for the community. A soldier who had been in a car accident arrived at the Emergency Department. The soldier was eventually helicoptered to another facility, but despite him being in Dawn’s care for no more than an hour, she made it a point to reach out and keep in touch with the family by exchanging pictures, phone calls, and cards from the team. This incident epitomizes Dawn’s character, as she yearns to keep personal connections not only within the walls of the Emergency Department, but with all who she comes in contact. She goes above and beyond just the task of providing physical care, searching for the needs of the soul.

Reflects the Mission and Values of Kettering Health Network

Dawn garners high praise from anyone who has worked or interacted with her. She is kind, positive, selfless, and always has a smile on her face. She wholeheartedly embraces Kettering Health Network CEO Fred Manchur’s emphasis on “faith, family, and work, in that order.” She is a humanitarian whose compassion and self-sacrifice allow her to give back to those around her. She does this by organizing school events, fundraisers, and various drives for the homeless and children. She also encourages her staff to be active and involved community members. Her strong sense of work-life balance allows her to perform at the highest level and be an example to those around her. With her family, Danw instills the same values of selflessness and service, whether it be by bringing them to participate at various events or volunteering in her daughter’s Girl Scout troop. Through her collaborative work efforts, she was able to see through the construction of the Preble County Emergency Department and now is involved in the process of getting a MedFlight helicopter permanently stationed there. This resource will serve as yet another way to provide the highest quality of emergency and trauma care to a deserving community.

Gives Back to the Community

Dawn not only served as the manager of the Preble County Emergency Department, but also as an integral part of the Eaton community. As a member of Eaton’s Rotary Club, she works alongside other members such as the mayor, business owners, judges, and teachers to improve the community. Preble County was the last county in Ohio without an emergency center. Through Dawn’s strong connections within the community, she led this initiative from the beginning stages to its completion. Her responsibilities included overseeing facility construction, hiring a team, and managing community relations. She was also instrumental in planning Boom-N-Blast, a celebration originally intended to bring excitement about the new Emergency Department. It has evolved into an annual community outing. It boasts an attendance of over a thousand people and features fireworks that had been absent from the county for years due to budget concerns. Dawn also helped organize Shoes for the Shoeless, another successful initiative in which the staff helped collect monetary donations for hundreds of pairs of shoes for underprivileged youth in the area. Because of Dawn’s tireless efforts and selfless nature, she and her staff have addressed the needs of the community beyond just their physical ailments.

And the Survey Says…
Community Outreach – Upcoming Events at Southview