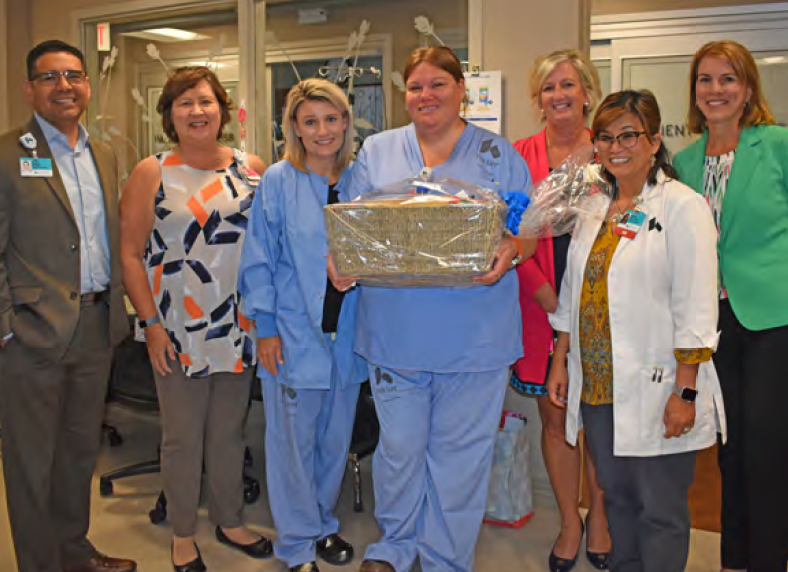 Congratulations to Nicki Haight, who was named Fort Hamilton Hospital’s July Employee of the Month. Nicki works in Family Birthplace at the hospital.

The Employee of the Month Award recognizes the people you love to work with. These winners show exceptional performance as defined by the network’s Standards of Behavior, live out the network’s values, and demonstrate the healing presence practices outlined in Called to Care. Nicki was nominated by a patient’s mother, and you can read the nomination story below:

“I first became very familiar with Nicki in 2017 when my son was born premature and we spent 15 days in the Special Care Nursery. Every one of the women there makes you feel comfortable and at home. Nicki is someone who is bright and cheery and truly makes you feel as if everything is going to be OK. She makes you feel at ease when a new parent is in their most vulnerable state. Today my son had to get outpatient labs done and after calling to the nursery to confirm what type of swab is used, which seemed to be rather large for a 23-month-old, the RN who was helping with the swab didn’t feel comfortable with such a small patient and Nicki came to the outpatient lab to help. It was reassuring to have someone who works closely with pediatric patients, and at the same time she was so helping, and it was comforting to see a familiar face. After she was done with collecting the sample, she comforted my son and me. A few minutes later, she returned with a stuffed animal puppy that she got for him. In such a worrisome time, the empathy and concern she showed is just amazing. It takes a special person to work with pediatric patients.”