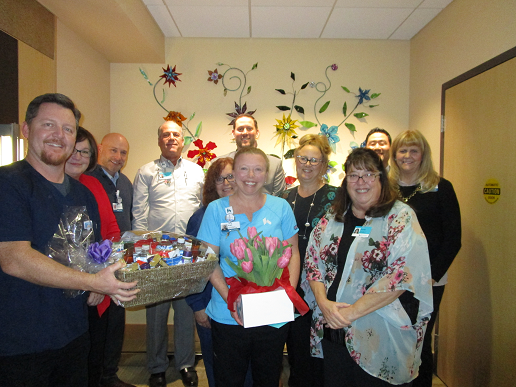 Congratulations to Angela Church, who was named Greene Memorial Hospital’s December Employee of the Month. Angela works in Mammography.

The Employee of the Month Award recognizes the people you love to work with. These winners show exceptional performance as defined by the network’s Standards of Behavior, live out the network’s values, and demonstrate the healing presence practices outlined in Called to Care. Angela was nominated by a co-worker, and you can read the nomination story below:

“Angie is always so quick to help, whether it be an employee or a patient. A patient had called into scheduling after receiving a call to come back for additional images. The patient was worried as she was going for surgery in the morning, and would not be able to complete the additional images for quite some time. Angie stayed late to complete the testing so the patient did not have this weigh on her mind. Angie shows such compassion and understanding with each and every patient. Angie represents all the networks values and missions with each and every patient.”