Carla Parker Recognized as Grandview’s Employee of the Month 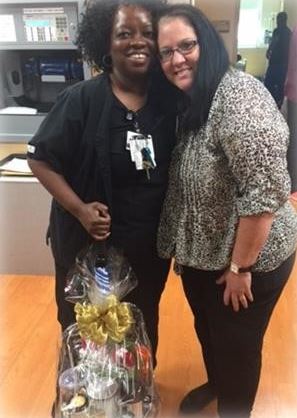 Congratulations to Carla Parker, who was named Grandview Medical Center’s July Employee of the Month! Carla works on 4 West at the hospital.

The Employee of the Month Award recognizes the people you love to work with. These winners show exceptional performance as defined by the network’s Standards of Behavior, live out the network’s values, and demonstrate the healing presence practices outlined in Called to Care. Carla was nominated by a fellow employee, and you can read the nomination story below:

“Carla contacted iSupport about a possible issue related to E-Prescribe for several of Grandview and Southview’s internal medicine physicians. These doctors were trying to use E-Prescribe when discharging patients, but it wasn’t always sending the scripts to the patients’ pharmacies as expected. This frequently caused delays in processing patient discharges, as the nurses had to track down the doctors to get paper scripts signed. This issue frustrated nurses, physicians, and most importantly patients. Because Carla took the time to investigate the issue and escalate it to Clinical Informatics, we were able to identify a problem with the way E-Prescribe had been set up for these three doctors and could make the necessary changes. Thanks to Carla’s focus on the patient’s experience, we were able to identify the problem and fix it in a timely manner. ”