Congratulations to Charles Love, who was named Sycamore Medical Center’s March Employee of the Month! Charles works in Systems at the hospital. 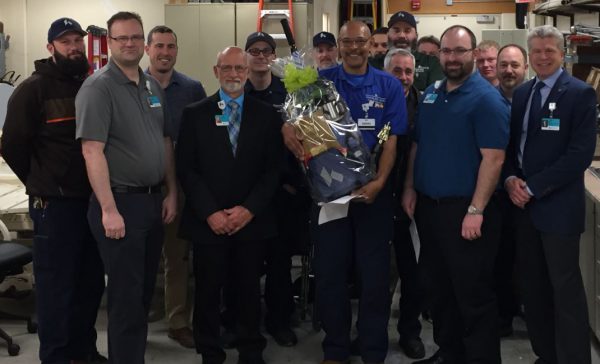 The Employee of the Month Award recognizes the people you love to work with. These winners show exceptional performance as defined by the network’s Standards of Behavior, live out the network’s values, and demonstrate the healing presence practices outlined in Called to Care. Charles was nominated by a fellow employee, and you can read the nomination story below:

Charles was called to our unit to fix the volume control of a patient’s TV. The patient was hard of hearing and was unable to hear the TV. Charles tried to fix the volume and could not find a solution at first. He tried headphones we had on the unit, but they were not loud enough for the patient. Charles offered his very own headphones for the patient to have to make her comfortable. The patient was very appreciative of Charles’ kindness and thoughtfulness while helping her. Later on, we had to call Charles back to the unit again as the TV in the next room was not working either. Charles came up with a solution that both fixed that TV and helped the first patient hear the TV louder! He did all of this with kindness, graciousness, and a big, wide smile. When I told him thank you for going above and beyond, his response was, “That is what I am supposed to do.” Thank you, Charles!