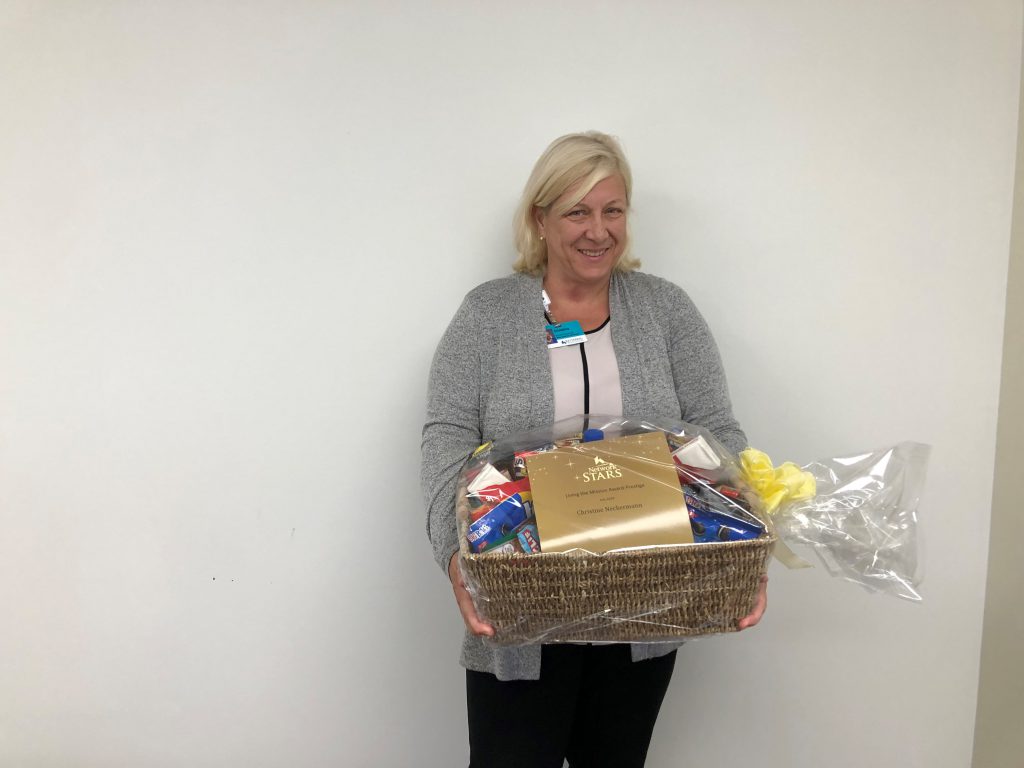 Congratulations to Christine Neckermann, who earned the Living the Mission Award. Christine works at in Recruitment at Prestige.

The Living the Mission Award is given to people who bring the network’s mission to life, demonstrating the sacred work of improving the quality of life for people in the communities we serve. They use their own time and resources to transform lives, whether that’s at a network location or out in the community. Christine was nominated by a fellow employee, and her nomination is as follows:

“I believe Christine’s actions are the kind of actions that Kettering Health Network wants to promote and recognize. I am a volunteer at Greene Memorial Hospital through a program called Enclave that is partnered with Xenia High School. Sophomore students from the high school will volunteer to do a variety of duties including dietary, environmental services, cardiac rehab, and maintenance. These students often are special education students who may lack some of the abilities of other students who are college-bound after high school. This program teaches the students job skills that include accountability, responsibility, teamwork, and work ethic. The goal of this program is for students to attend the Greene County Career Center to learn a skill and then be employable after graduation. This Enclave program is the beginning step in the process.

Christine helped a young woman who first came to Greene Memorial as a member of Enclave. She came into this program with plenty of self-doubt and low expectations for herself. She left the program feeling dignified and strong. The woman went on to the Career Center and will be a senior next year. She had such a positive experience with Greene that she wanted to return to the hospital and begin working there. The problem is that she does not have access to dependable transportation. That is where Christine has reached out and made a difference in someone’s life where many other people may have overlooked. Christine would not allow her situation to prevent her from being employed. Christine drove out to Xenia early in the morning, picked up the young woman, and then took her to her pre-employment appointment. Christine then drove her back to school. People who are young and powerless may not have the influence to tell someone that matters their appreciation, but I am hoping to be that voice by telling this story to bring recognition to Christine. There are thousands of people who do amazing things every day for Kettering Health Network. Christine may not have saved someone’s life, but she may have changed the life of someone who needs help and guidance.”