Erin Magee Recognized as Soin’s Employee of the Month

Congratulations to Erin Magee, who was named Soin Medical Center’s October Employee of the Month! Erin works in PICC Line at the hospital. 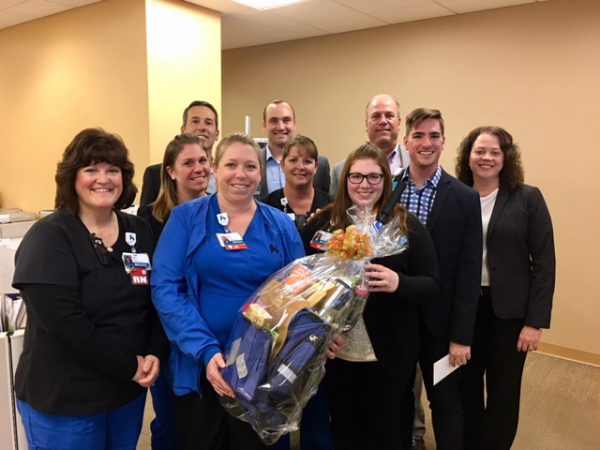 The Employee of the Month Award recognizes the people you love to work with. These winners show exceptional performance as defined by the network’s Standards of Behavior, live out the network’s values, and demonstrate the healing presence practices outlined in Called to Care. Erin was nominated by a fellow employee, and you can read the nomination story below:

“The other night, I had a patient who lost IV access just after 7 p.m. The patient was a very hard IV stick, and I knew that a Doppler would be needed to place this IV or a more invasive line would need to be placed. Erin is on day shift and this night, there would be no one on night shift. As Erin was walking out the door to go home, she happened to hear what was going on and she turned around to come back. Erin arrived to my unit with a smile. I told her that the patient was in the shower and it would be a few minutes before I could get them to bed so she could do her job. Erin didn’t have to turn back in from walking out, but she knew that it was what was best for the patient. Erin is my go-to girl when it comes to IV lines and she always takes the time to teach others.”