Congratulations to Kathy Simpson, from 4 West at Grandview Medical Center, for being named the hospital’s December Employee of the Month! 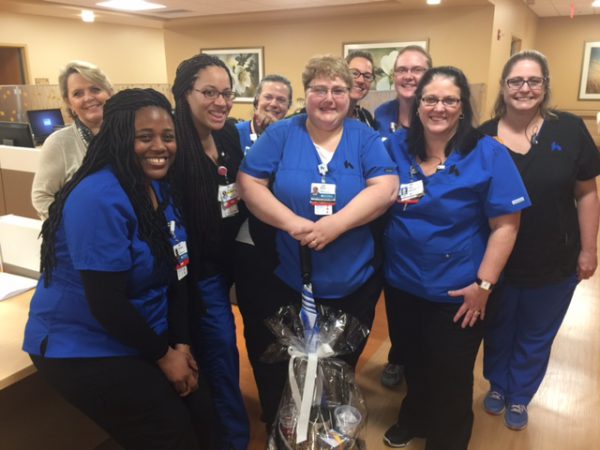 The Employee of the Month Award recognizes the people you love to work with. These winners show exceptional performance as defined by the network’s Standards of Behavior, live out the network’s values, and demonstrate the healing presence practices outlined in Called to Care. Kathy was nominated by a fellow employee, and you can read the nomination story below:

Kathy Simpson had a patient that had been at Grandview for several days and his wife was by his side pretty much his entire stay. Kathy and the patient’s wife were talking, and it happened to be the wife’s birthday. Kathy called me and told me that it was her birthday, and she believed her husband had forgotten and asked if I would find little something at the gift shop. When I got back on the unit, she had rounded up the staff and had everyone sign a card and go sing to this patient’s wife. The wife’s face was priceless and you could tell that it meant the world to her. She could not stop smiling! Kathy went above and beyond for her patient’s family member that day, and even though it was something little, you could tell it made a big difference in her day!