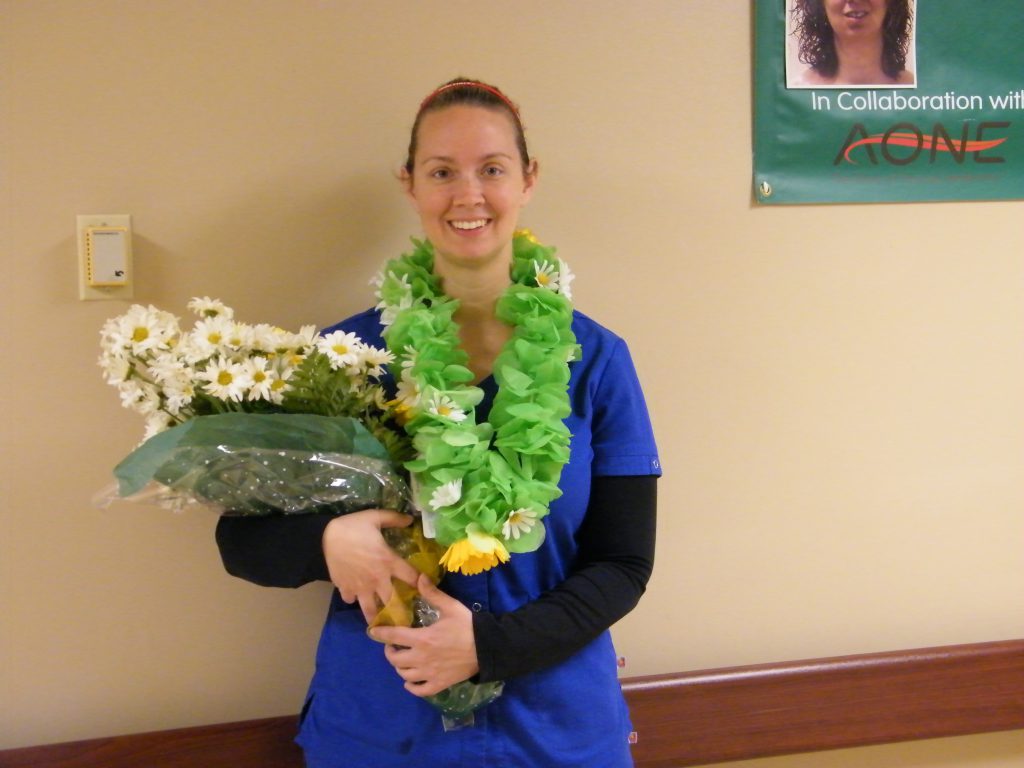 Congratulations to Clarissa Kimball, a nurse in MICU at Grandview Medical Center, for winning the hospital’s November DAISY Award!

The DAISY Award is given to nurses who demonstrate clinical skill and compassionate care. It was established by the family of J. Patrick Barnes, who died of a disease attacking the immune system (DAISY). His family was awestruck by the care and compassion his nurses provided, so they established this award program.

You can read Clarissa’s nomination story below, which was submitted by a patient’s family member:

A patient was preparing for discharge, but while talking to the physician, he went into cardiac arrest. After being resuscitated multiple times, he went into MICU. The first couple of hours being back there, he had different nurses and physicians in and out. Family wasn’t allowed to see him for quite some time.  Once it was time for shift change, Clarissa was his nurse.

From the time Clarissa came in she was very attentive. She was very thorough with making sure he was getting all his lines changed.  She was very detailed in giving valuable information on why he was on everything. She was extremely patient with everyone’s questions. Once he was allowed to have visitors, she was supportive for his younger family members. She went through all his machines, comforting them and letting them know what he was doing on his own.

Clarissa went above and beyond giving him a bed bath and getting him cleaned up and smelling fresh.  She wrote everything out as the doctor was talking to help me understand. As the night progressed and everyone left, she was very prompt on answering my calls, four times through the night.  Clarissa was a breath of fresh air. Kettering Health Network and Grandview Medical Center are beyond blessed to have someone like Clarissa. She is caring, dedicated, and extremely loyal to her work.  Her working with the patient in his critical care needs shows it immensely. Clarissa is beyond deserving of the DAISY award.  Each night that we are here, we will request to have her.

Thank you Grandview and Kettering Health for having employees such as she.  Not only from myself, but also the family, who is beyond appreciative of everything your employees are doing.