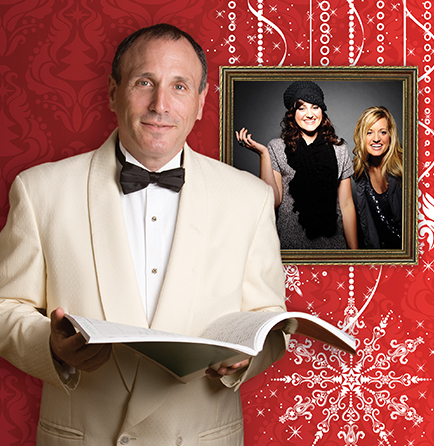 This December, the Dayton Philharmonic Orchestra will be joined on the Mead Theater stage by local duo Adelee & Gentry for a beautiful celebration of the holiday season. Then choirs and choruses from the region will gather together with the DPO for an uplifting holiday tribute that will have you thrilled that you are “Home for the Holidays” in Dayton.

Sisters Adelee and Gentry Gates have been singing and performing as a duo for the past five years in and around their hometown of West Alexandria, Ohio. Adelee is the wife of Kettering Health Network employee, Tyler Small.

Adelee & Gentry, “have a polished folk-pop sound that is grounded by a rootsy base but elevated by the self-taught sisters’ unique yet captivating style of two-part harmonies.” (Dayton Daily News Life section and ActiveDayton.com) The sisterly collaboration released their breakthrough debut album, “Nice to Meet You…” in March 2012 and their holiday EP “Waiting for Christmas” later that same year. Adelee and Gentry’s unique vocal styling and harmonies are garnering attention from music industry pros such as Billboard 615 Spotlight and Music News Nashville. They have been featured on local TV shows (Living Dayton and Words & Music Nashville) as well as local radio stations.

Adelee & Gentry, together with the DPO, will fill us with holiday spirit with their performances of Carol of the Bells, Waiting for Christmas (an Adelee & Gentry original), Jingle Bells, Dear Boy, and Angels We Have Heard on High.

Then some of the finest local chorus and choir singers across the Dayton/Miami Valley region, including members of the Dayton Philharmonic Orchestra Chorus, will come together to celebrate the holidays by taking the stage together as the Holiday Pops Community Choir, singing some of the great sacred music of the Christmas season.  The concert will also include music from The Nutcracker, both Tchaikovsky’s original version and the jazzy re-interpretation by Duke Ellington and Dayton native Billy Strayhorn.

The Sinclair Community College Concert Handbell Choir will then take the stage to dazzle us with their precision and interpretation of some of our holiday favorites.