Ian Flagg Recognized as Sycamore’s Employee of the Month

Congratulations to Ian Flagg, who was named Sycamore Medical Center’s October Employee of the Month! Ian works on Unit 2 East Cardiac Medical at the hospital. 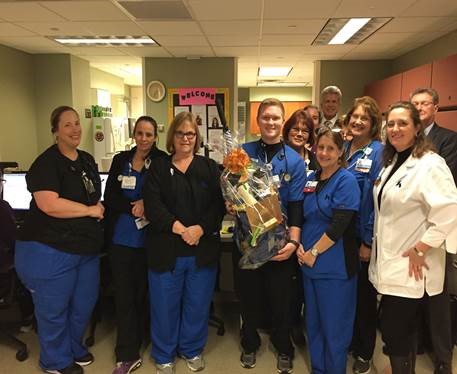 The Employee of the Month Award recognizes the people you love to work with. These winners show exceptional performance as defined by the network’s Standards of Behavior, live out the network’s values, and demonstrate the healing presence practices outlined in Called to Care. Ian was nominated by his manager, and you can read the nomination story below:

“I was rounding on an elderly patient and his wife and they reported to me that Ian Flagg was the best nurse they had ever had. He reported that when he was initially admitted, he was in a semi-private room. Ian had been his nurse, and he told Ian that he and his wife had been together for over 50 years and had never been separated. He wanted a private room so his wife could stay with him. It was after the end of his shift, but Ian stayed and spoke with the charge nurse and coordinated a move to a private room so the patient’s wife could stay with him. The patient was crying he was so appreciative. He told me that his wife was everything to him, and it made a real difference in his recovery to be able to have her at his side. Ian listened to his concerns and took action.”