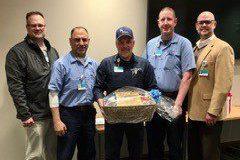 Congratulations to Jerry Humphrey, who was named Troy Hospital’s November Employee of the Month. Jerry works in Plant Maintenance.

The Employee of the Month Award recognizes the people you love to work with. These winners show exceptional performance as defined by the network’s Standards of Behavior, live out the network’s values, and demonstrate the healing presence practices outlined in Called to Care. Jerry was nominated by a co-worker, and you can read the nomination story below:

“At Troy, there were new doctors that were needing a sleep room onsite to serve our hospital.  Once the room was ready, Jerry and his crew got everything ready and realized there was no mattress.  Through emails it was determined that there was a spare mattress at Middletown and they could use it at Troy.  That was on a Thursday evening, but our couriers couldn’t pick it up until Monday, as their Friday was full.  Jerry saw this communication on Friday morning and decided that he would drive from Troy to Middletown in his own vehicle to get the mattress and have it setup for Friday evening. Thank you, Jerry for going the extra mile!”