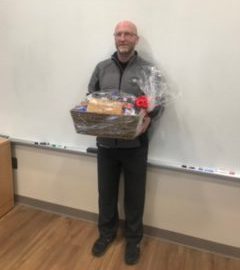 Congratulations to Joshua Nelson, who was named ASB’s February Employee of the Month. Joshua works in Information Systems.

The Employee of the Month Award recognizes the people you love to work with. These winners show exceptional performance as defined by the network’s Standards of Behavior, live out the network’s values, and demonstrate the healing presence practices outlined in Called to Care. Joshua was nominated by a co-worker, and you can read the nomination story below:

“Josh is a glowing example of someone who is called to serve those who serve. Josh always displays a committed relationship with the Pharmacy Service Line and goes above and beyond to serve our guests. As the coordinator and Scrum Master for the Epic Willow team, Josh is tasked with building and maintaining a productive relationship with our users and team members. He has also helped to pioneer our department’s journey toward Agile and is continuously working toward improving processes to result in providing only value. Recently, Josh took control of an issue with Labelview, and went above and beyond in his efforts to fix a work stoppage issue for our Pharmacists. Josh not only fixed the problem quickly, but came into the office on his day off to do so. Josh’s collaborative attitude has helped the Willow team remain productive while being down two team members. He protects the Willow team’s capacity and work life balance, while always delivering value to our end users. Josh’s commitment to his team and service line are contagious, and is a driving force behind the Willow Team’s consistently high performance.”