Congratulations to Shawn Lackens, RN, a nurse on ICU at Southview Medical Center, for winning the hospital’s September DAISY Award! 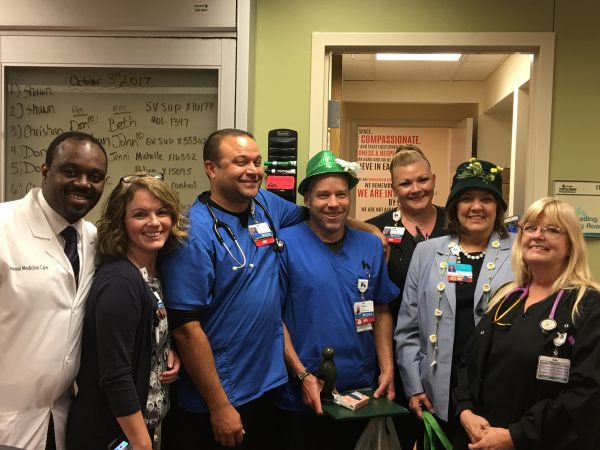 The DAISY Award is given to nurses who demonstrate clinical skill and compassionate care. It was established by the family of J. Patrick Barnes, who died of a disease attacking the immune system (DAISY). His family was awestruck by the care and compassion his nurses provided, so they established this award program. You can read Shawn’s nomination story below:

“As a network employee with a recent experience having my husband in the ICU at Southview Medical Center, I would like the opportunity to nominate Shawn Lackens at the very least for a Network Star recognition if not a Daisy Award for his exceptional care as a nurse.

This angel of mercy cared for a man whose body had wasted to nothing and could not keep so much as a sip of ginger ale down; his patient had constantly fluctuating vitals yet still, when the family took time to get away for some rest, it is apparent Shawn took the time to listen to lots of grandchildren and life occupation stories relayed by my husband who remained very aware mentally through his whole ordeal.

While that is his job, Shawn was much more than just a nurse by befriending me and my two daughters and the older grandchildren. He gave us hugs amid his own tears as he left his Sunday shift and would not be returning the next day. In retrospect, I think he professionally knew the patient would not be there any longer when he returned.

And if that wasn’t enough, as I was being entering the sanctuary of our church for a Celebration of Life service, whom should I catch out of the corner of my eye making a lonely walk up to the church door but Shawn. When I asked what he was doing there, he simply responded he was ‘compelled’ to do so.

I considered him a part of our family that day.  How can a person we had known for 6 of the most difficult days of our lives choose to honor my husband, his patient, in this way?  I have to believe that when he changed career to enter the nursing profession and then landed in the ICU at Southview, God had a plan.

Thank you, Shawn Lackens.  You are truly a Kettering Health Network star and angel of mercy.”