Congratulations to Tomalena Noble, who was named Soin Medical Center’s November Employee of the Month! Tomalena works in the Emergency Department at the hospital. 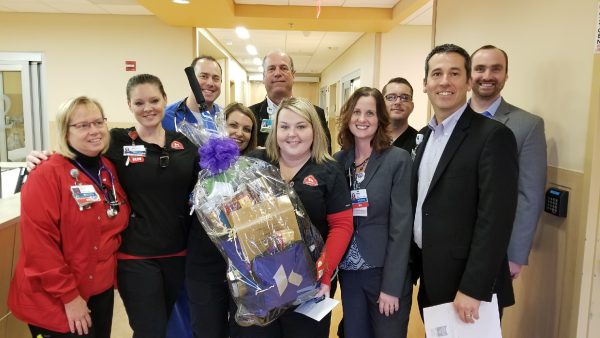 The Employee of the Month Award recognizes the people you love to work with. These winners show exceptional performance as defined by the network’s Standards of Behavior, live out the network’s values, and demonstrate the healing presence practices outlined in Called to Care. Tomalena was nominated by a fellow employee, and you can read the nomination story below:

“Tomalena is one of those co-workers that make you smile and sigh in relief when you see her face at the start of the shift, because you already know it is going to be a great day! She is not only willing to do anything and everything that is asked of her, but the size of her heart shows with every encounter she makes, even when it is on the phone with our patients. One example of this was with an elderly gentleman who was in the Emergency Department and unfortunately has minimal family support. Because of his injuries, his hearing was affected. When he went home, he realized he was unable to even make his follow-up appointment as suggested upon discharge because he could not hear the person on the other end of the phone. Not knowing what to do, he returned the next day to the Emergency Department and came to the triage desk. He told the nurse his problem, and without hesitation, Tomalena told the man to follow her. She took him to the consult room where she proceeded to make the follow-up appointment for him. She took the time to show a prior patient that our caring and concern for his health is our number one priority. This is only one of hundreds of times I have witnessed Tomalena showing what I consider great care for not only those who are current patients in the department, but continuing that great care even after they leave. I want her to know how much she is appreciated.”