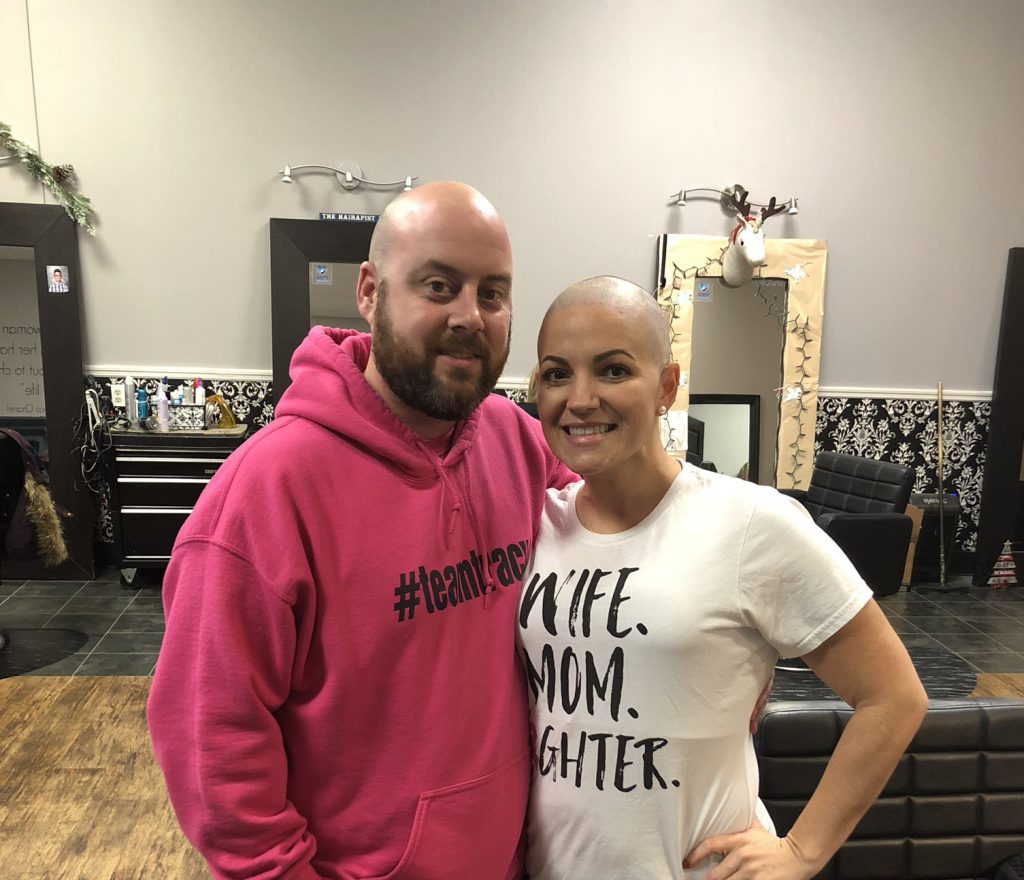 Tracy Evans: The Long and Difficult Road to Overcoming Cancer

We all know what it’s like to let a small problem fester. We say we’ll get to it, but by the time we do, the problem becomes even worse. It’s like a small crack in the windshield– the longer you wait to fix it, the bigger the crack will get.

For Tracy Evans, a 38-year-old registered nurse first assist at Grandview Medical Center, something that seemed minor would ultimately change her life.

On Wednesday, September 19, 2018, Tracy had seen Michael Elrod, MD, who she works with, prior to starting her work day. Dr. Elrod does many breast surgeries and has a passion for diagnosis and treatment of breast cancer. She mentioned to him that she thought she felt something in her left breast.

“Honestly, I had only felt it for about six weeks, but it did seem to be getting bigger,” said Tracy. “It didn’t really feel like a ‘mass’ but more like thickened tissue. For both these reasons I thought it was probably nothing, maybe just dense breast tissue.”

Dr. Elrod ordered her a mammogram that same day. Her results showed dense tissue, so she would need an ultrasound. After that, the radiologist, William Meyers, MD, said the masses were suspicious and concerning, and that she needed a biopsy. Slightly more concerned, Tracy asked, “Do you think it could be malignant?”

“I’ll never forget that line above all else,” said Tracy. “That weekend before I was diagnosed, I had gone to Walmart, and there was pink stuff everywhere. It just felt surreal. It seemed like it wasn’t happening to me.”

On September, 26, just days after her conversation with Dr. Elrod, Tracy was diagnosed with stage three invasive lobular carcinoma. This began the long and difficult road of defeating cancer. Tracy had a double mastectomy and lymph node biopsy surgery, where they discovered of the 14 lymph nodes tested, five were positive for cancer. This meant Tracy would need multiple types of treatment.

Tracy endured 20 weeks of chemo, where her rigorous schedule included multiple types of chemotherapy. Tracy had her last chemo treatment on March 26, 2019.

“I was very anxious about my last treatment,” said Tracy. “When you’re done, you’re not sure if it did anything, and then you’re not doing anything, too. At least when you’re going through chemo, you feel like you’re doing something to combat it. So, I was happy, but I was also wanting to know when I could start radiation so I could get to the next thing.”

Tracy had breast reconstruction, followed by 28 days of radiation to the left axilla and chest wall. She completed radiation in July 2019 and visited Kettering Cancer Care every four weeks while being on hormone suppression therapy.

Now, after two years of treatments, surgeries, and trips to Kettering Cancer Care, Tracy currently has no signs of disease. A long battle was won and changed her life forever.

Tracy’s journey reminds us of the strength and courage it takes to defeat cancer, and just how important it is to take the necessary steps to detect it early.

“A breast mass may not feel like what you think it would,” said Tracy. “Any changes are something to be looked at. If I hadn’t said something, I could have been one week away from stage four breast cancer. I think of that all the time. Cancer erased my personhood for almost two years, but I’m so blessed to have the outcome the way it is.”

What seemed like something minor, like a small crack in the windshield, turned into something much more for Tracy. But deciding to get checked ultimately prevented what was already a taxing and brutal battle from becoming much worse.

To schedule a mammogram or send a reminder to a friend, visit ketteringhealth.org/pink