Congratulations to Tracy Stafford and Karla Savage from Kettering Physician Network for earning a Constellation Award! They both work in Administration at Austin Landing. 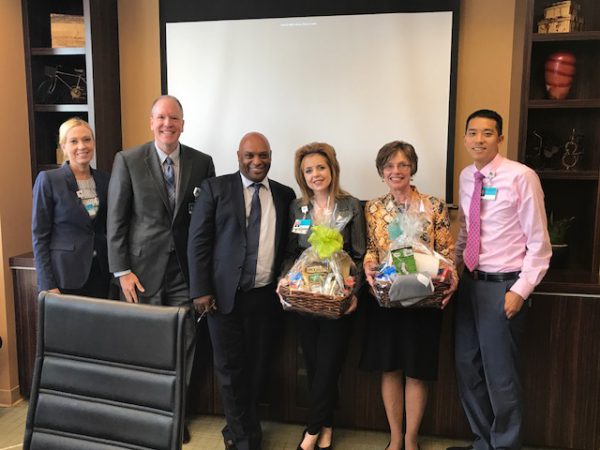 The Constellation Award recognizes strong teams that come together to serve patients and each other. They demonstrate a calling to care, live the network’s values, and show exceptional performance as defined by the network’s Standards of Behavior. Tracy and Karla were nominated by a co-worker, and you can read the story below:

“Last week, Karla happened to glance out the window and noticed that there was a car stopped on the highway. The car was not pulled off to the side. Rather, it was in a lane and completely stopped. She then saw a woman run out of the car and sit in a grassy area off to the side of the highway. Cars were zooming by this car that was stopped in a lane, and we were very concerned that someone was going to hit the car and the woman could be injured. Immediately concerned about the woman’s safety, Karla ran downstairs and asked for someone to help. She and Tracy ran outside to help the woman. They realized that she had two children with her. Karla and Tracy helped all three over the fence and into our building to safety. It was clear that all three were a little shaken up, so Karla and Tracy did their best to calm them down, even finding crayons and coloring books for the kids. As it turns out, the woman they helped also works for the network. A few days later, the woman sent an email to Karla and Tracy stating:

‘Hello, I am not sure if you will remember me or not. I was the lady who broke down on the side of the highway the other day with two of my grandchildren and you took the time to help us in every way possible. I sincerely appreciate your generous and kind helping heart. I cannot thank you enough for everything you did. You took time out of your day to make us as comfortable as we could be, especially the children. They have talked nonstop about you and other staff members and how nice you were. I can say it is an honor to be an employee of Kettering Health Network with others like you. It is not just a job to me–it is like one big family with some members you just have not met. It is an honor to be part of this network, especially with people like you. I cannot thank you enough. Have a great day and God bless.’

Karla and Tracy are both wonderful examples of our mission in action.”